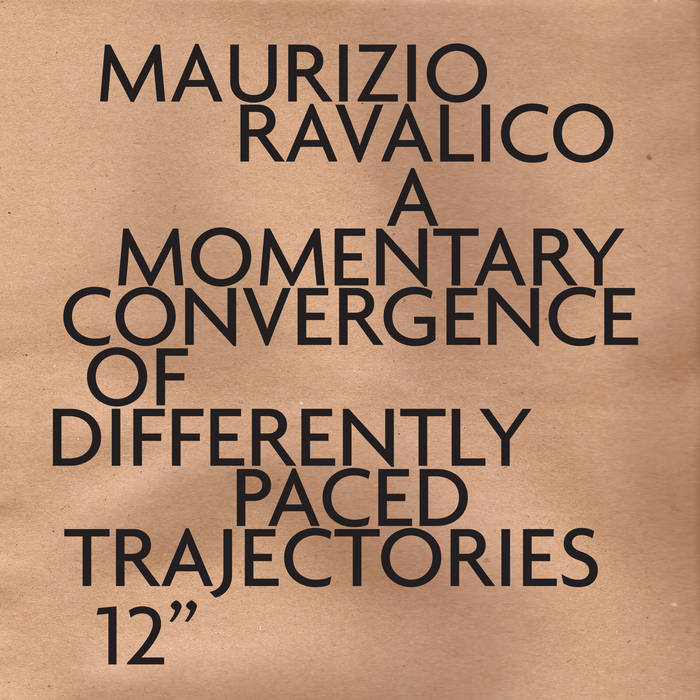 The 12” EP “A Momentary Convergence of Differently Paced Trajectories” is a prelude and companion of Maurizio Ravalico’s first solo percussion album “Nobody’s Husband, Nobody’s Dad”, and it comes in a numbered run of 300 individually screen printed 320gsm manilla card sleeve.

The EP's B side contains a shortened version of one of the album’s tracks, a remix of the same by irredeemable d’n’b veteran Enjoy, while on side A there are two personal percussion-heavy takes on two illustrious collaborations from 2017: the London/Berlin trio Fiium Shaarrk and Tamar Osborn’s Collocutor.

And now on a more personal tone.

In anticipation and preparation for the release of my first solo percussion album, "Nobody’s Husband, Nobody’s Dad", I felt a need to stop for a moment, and mark this new episode of my creative life by firmly establishing its place in time.

Two recent musical adventures were instrumental in the consolidation of the sound vocabulary that is at the core of my solo act: the trio Fiium Shaarrk and Tamar Osborn’s Collocutor.
Both gave me the possibility to test the functionality of material that was created and developed during hundreds of hours of solitary explorations, strengthen its meaningfulness by applying it to the challenge of different musical ensembles, and putting it at the service of music composed by other people.

Side A of this 12” ep is a personal take on two tracks from these respective bands.

I have been playing with Collocutor for some four years now, and I have worked closely with Tamar Osborn since the band’s inception in the creation of its peculiar sound. “Here - Fanfare for the End of the XX Century" is my personal take on the first section of the triptych "Here to There to Everywhere", from Collocutor’s latest album "The Search".

Fiium Shaarrk is a musical Hydra resulting from the equal creative input of three minds. Isambard Khroustaliov (electronics) and Rudi Fischerlehner (drumkit) are possibly the best musicians I know in their respective field; with them I had the good luck of playing for seven years, and release two albums which embody my ideal of ensemble music probably more than any other work I’ve released in my life; so far that is.

Despite being both losely presented as remixes, neither of the two tracks on side A makes use of samples from the respective releases, making them both more covers than proper remixes.
In the case of Fiium Shaarrk’s tune the material used from the original session is actually from an out-take; an attempted variation on "Fear of Mapping" that didn’t make it to the final album ("No Fiction Now!", Fiium Shaarrk’s first album). On “Here” I have played and programmed everything except the horn lines; these are taken from the pre-production demo which I have produced and co-ordinated prior to the actual album recording.

The B side opens with a remix of one of the tracks from my forthcoming album. "Just Bring your Toys (Enjoy remix)" is the work of Alessandro Corsini, aka Enjoy, a long time friend who has also remixed two Fiium Shaarrk tracks in the past years. Enjoy dj releases with Omni Music, Bustle Beats and some others. You should check him out if you’re even remotely interested in old school drum’n’bass.

The ep closes with a heavily condensed edit of "Just Bring Your Toys" (the full length album track is over 10 minutes long).

Fiium Shaarrk have released two albums, with the Not Applicable label. Their 2017’s "We Are Astonishingly Lifelike" was included in Gilles Peterson’s 50 Essential Jazz and Beyond Records of 2017, while BBC3’s Late Junction listed it as one of the 12 best albums of 2017, in the good company of Bjork, Kendrick Lamar and Arca.
Collocutor is lovingly looked after by On the Corner records. The track "Here to There to Everywhere", from which track A1 of this EP is derived, comes from the album "The Search", which was number 45 on MusikExpress' Top 50 Jazz Albums of All Times list.

Maurizio Ravalico’s solo percussion album "Nobody’s Husband, Nobody’s Dad" is scheduled for release on Funkiwala on November 5th 2018. All Bandcamp purchasers of ‘A Momentary Convergence of Differently Paced Trajectories' will receive a complimentary discount code for the purchase of the above album.

Funkiwala is a new London based label, run by musicians and committed to break down superflous barriers between musical genres.

All percussion on all tracks: Maurizio Ravalico, except as diligently noted on A1

Lovingly mastered by Bob Macciochi at S.C. Mastering, except B2
Sleeve design by yours truly, manually screenprinted at DesignJosef, Berlin